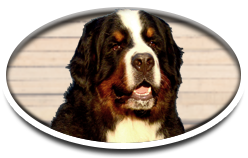 Early in the evening. A young girl comes home from a walk with a black dog with symmetrical white and brown coloration on the head, chest and paws. It seems that the dog is carelessly running forward when a man silently approaches the girl and begins talking to her arrogantly and threatens her. The dog immediately rushes to his owner and its size and unequivocal growl quickly dissuade the intruder and drive him away. What Is the breed of this brave dog that flawlessly assesses the situation, that is able to take quick decisions and is ready to do anything to protect their loved ones?

In the park. A child riding a bike. Suddenly two midium-sized dogs start running toward him with furious barking and their owner fails to control them. The child starts crying, his mother begins to scream. Hearing the bustle, ignoring the call of his mistress, a strikingly beautiful dog comes running and instead of barking like the other two dogs, as everyone expects, the big dog frightens them away with a powerful bark and snapping, then accompanies the child until he is sure it is safe. What breed is it this noble, clever and confident dog, ready to protect not only their owner but also a stranger in trouble?

A busy street. A man walks a dog ​​with smooth, long, gleaming black hair on a leash. They pass by different people. Towards the couple rushes a child with mental illness, making uncoordinated jerky movements that most dogs would recognize as threatening. Instead of startling grunt or barking, the dog stands calmly and allows the child to get close to him and stroke him. What Is the breed of this dignified and balanced dog that is tolerant to all people of good will and fearless in all situations?

A woman parks her car in front of her home. Opens the trunk and takes out a big number of shopping bags, as well as empty basket. Then she takes  a small child out of the car. Obviously, there is no way to take all at once to her apartment on the fifth floor. But she has no intention of trying. She puts most of the purchases in the basket and then an impressive dog that has been patiently waiting in the car jumps out, bites the handle of the basket, that is readily softened with fabric, and takes it up the stairs. What Is the breed of this courteous and devoted dog, that happily involves himself in all activities of your family?

Perhaps you have already guessed that the breed of these dogs is one and the same – Bernese Mountain dog (Berner sennenhund, Bouvier Bernois, Bernese mountain dog). Descendants of Swiss farm dogs, strictly selected for centuries not only because of their external characteristics, but also because of their efficiency and adaptability, the Berners still retain those qualities. And today they willingly participate and help in a wide range of the activities of their owners. It is true, many of them have replaced the herd of cows with the family that they accompany and “gather” during a walk, they pull a sleigh with a child instead of a cart loaded with cans of milk, they find and bring not the agricultural tools but the missing glove of their master, they guard not the farm but the houses and apartments where they live. But they remain the same dedicated, loyal, easily susceptible dogs. What has somewhat changed in the last century is their appearance – or better said, it was unified. With the introduction of the first breed standard (in 1907 by prof.Albert Heim) and the launching of pure-bred breeding, people started to seek for exterior features that transmit sustainably through generations, other features were intentionally avoided until they achieved the appearance of the Bernese Mountain dog we know today.

While the appearance of Berner is truly remarkable, its true beauty is his character. Not surprisingly, with each subsequent revision of the standard requirements in this regard are becoming more detailed and stringent. The typical Bernese Mountain dog is balanced, confident, very strongly attached to its owner, friendly to strangers, intelligent, easy to train. It chooses the leader of its “pack” but is most happy when all family members are around. As a rule, most Berners coexist well with any pets and consider them part of the family.

One of the many remarkable qualities of the Berners is their adaptability – if they receive the love, attention and care (including long walks) that are vitally important to them, they feel good in a house with a large garden, as well as in an apartment. It is much more important to them to be close to their people and to participate actively in their lives than the place they live in. They like the training and active life with an athletic owner just as much as the quiet walks with an elderly couple, and the variable lifestyle of a family with children (indeed, according to a number of rankings the Bernese Mountain Dogs are among the 10 most suitable breeds for families with children *). What Berners can not tolerate and often leads them to depression and destructive behavior is loneliness and isolation. The only master who is unsuitable for Berners is the one who neglects them intentionally or due to the nature of their work is absent from home for most of the day.

Since times when Swiss Cattle dogs were rather type than certain breeds, the Berner has retained its natural instinct to defend territory, his family and his property. He notices and pays attention to everything going on around him and his people and immediately alerts them if something seems unusual or suspicious. However, the balanced Berner with stable character never barks unnecessarily and bites only in emergencies that he evaluates impeccably. If something or someone is seriously endangering his family, the Bernese Mountain Dog shows amazing initiative, bravery and quick reactions.

These well-intentioned and temperamental animals are as fearless, as well as delicate and fragile when they are subject of rudeness or injustice. They can be taught whatever you think of with little effort, as long as the approach includeс mostly positive motivation and as little corrections, as possible. Prof. Heim says that for Berners to show their innate abilities a comfortably arising situation to serve as an example is sufficient and no special training is needed. It is valid in an environment similar to the one they lived in 100 years ago, as well as in the environment they live in today. In the city, however, the Berners and all other dogs, need early socialization and proper training to make their behavior predictable and controllable, and the dogs themselves – conflict-free members of society that are enjoyable and liked by all. Moreover, training and work with the Berner is one of the greatest pleasures that dog and owner can give to each other. It will affirm the human leadership, strengthen the relationship between man and dog, keep the dog in good physical condition and satisfy his enormous desire to work and be useful, and the owner will be filled with pride and a sense of satisfaction. In such a way, the communication will be full and revealing the true wonders of this breed!

The Bernese Mountain dog is lively, mobile, friendly and kind, an example of resourcefulness and devotion. All this, along with easy feeding, moderate activity need, adaptability, acceptability and ease for training, loyalty, and last but not least the breathtaking beauty make it a wonderful pet.

What else to consider:

Nutrition: whether natural or commercial, food must be of the highest quality. The type of food and the amount should be adapted to the life stage of the dog and its specific energy needs. In the period of growth it is particularly important that the food is low energy and has an appropriate (low) calcium level for preventing joint problems.

Coat maintenance: brushing at least once a week and during periods of moulting – more often. The most suitable type of comb is the “rake” and fine wire brush for combing any matted areas and removing thorns, dust and undercoat.

Hygiene: nothing breed specific, usual procedures – bathing (preferably no more than once every two months), cleaning the teeth (in case the dog is kibble-fed), cleaning of ears (if needed), checking the paws and ears for awns (in the summer), checking the the entire body for bumps, injuries (when brushing) and ticks (daily in the tick season).

Activity need: moderate; the Berner would rather pull a cart or a sled, rather than running after a bicycle, but is a mobile dog that needs adequate physical activity; long mountain hikes, active sports and jumping are permitted only after the dog reaches the age of two years. Also, the owner must carefully choose the playing partners for their Berner in the period of growth. The best playmates for a growing Berners are other large breed puppies around the same age as the Bernese puppy. Bigger and heavier dogs can harm him during rough play, smaller breeds can run faster and make sudden turns which can cause elbow joint injuries.

Health problems: bloat, elbow and hip dysplasia, osteochondritis. The main reason for early death in Bernese Mountain dogs are cancerous tumors – the typical for the breed histiocytosis, but also lymphosarcoma, fibrosarcoma, osteosarcoma and others.